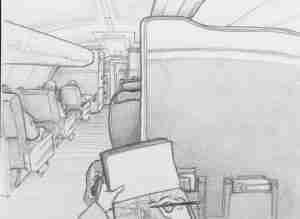 Since 1997, I have been drawing airplanes.

Since 1997, I have been detailing my airline travels. My comings and goings, at times indicating the airline or flight number.

One illustration became two, two became 12 which over 2 decades became 200 plus.

Little did I know I set myself on a journey 20 years ago that allowed me the opportunity to look back and realize that I happened upon something special.

This is not something I ever thought I’d do—publish a coffee table book. Every so often someone would ask me just after I posted a plane illustration to social media, “When will the coffee table book would come out?” and I would laugh and say, “A book? Who really wants to see these?” Then others would ask, then another, and another and after awhile I gained the confidence to consider it and with Kickstarter's help I figured, what the hell.

I thank all those friends and family that have encouraged me to get to this point. You know who you are. Please accept my thanks with a bow and a virtual high-five. It’s only with your insistence that this book has a chance. So here I am on the eve of my first Kickstarter campaign to try to generate the funds to do just that.

It’s frightening, exciting, humbling, and filled with much anxiety and apprehension. I'm ready for the journey if you're willing to join me. So put your tray tables up and make sure your seats are in their full and upright position, because tomorrow it’s time for liftoff.